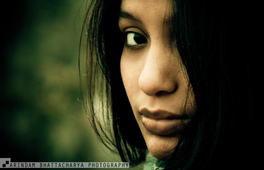 He was like my own special friend. No one else could see him but me and that made me feel special, like he was my own secret. He told me to do things, strange harmless things like clapping my hands together or hopping up and down. Mum and Dad didn’t think much of it at the time. They thought I was playing some kind of game. It was when I was five and I started questioning him that I began to fear him. That’s when things began to get out of control.

It was a really important business meeting between my mum and her boss. The most important dinner of her life mum said. I was at the head of the table, silently eating my desert. I could feel his breath on my neck.

He pointed from my plate of ice cream to my mum’s boss, indicating for me to throw it. I turned to laugh but his face was serious.

“No! Mum told me to be on my best behaviour today, I’m not messing this up for her,” I whispered. Mum didn’t look up; she was used to me having a conversation with thin air.

His nostrils flared and he bared his teeth. His eyes, usually a deep hue of blue, were an angry red. “Listen to me,” he said emphasising each syllable. “You’re going to do what I say or else you’re not even going to have a mum.” His voice was like cold as ice and I knew he wasn’t joking..

Mum was in deep conversation with her boss and she didn’t see me take the scoop into my fist. I closed my eyes and flung the ice cream. I heard a sickening splat as the ice cream hit the women. I cringed and opened my eyes, blushing in shame.

The women’s blue dress had a pink stain all down the front. Mum was staring at her in utter horror. Dad was framed in the doorway, a look of pure outrage on his face. I didn’t meet Dad’s eye and looked shamefully at the floor. I could hear him laughing in my ear; an evil, spiteful laugh I would learn to know very well.

I was grounded for a month. Mum didn’t get the job.

It continued. He was always whispering in my ear and I came to resent him. He made me smash the family portrait in the living room. He made me colour the sofa with my markers. He made me cut holes in the curtains with the kitchen scissors. He told me he was going to kill mum, my granny, my kitten Marmalade I got the previous year. The requests became more and more frequent and by the time I was eight he was making me do awful things every week.

Mum reached breaking point when I got expelled from my first school. The kids there already considered me an outcast. They had seen me talking to myself when I thought they weren’t looking and they had heard some of the strange things I did. Ripping Kelly Boland’s dolls head off. Locking Darren Matthews in the toilet for hours. Writing with permanent marker on the tables. The other kids always steered clear of me. It was during break and I was sitting in the corner alone, as always. Everyone was filing back inside for class and I was getting to my feet when he held me back. He led me to the side of the school. There was a blank wall I walked by every morning there. He held out a black can of spray paint. I knew what he meant me to do and I said nothing, just took the can in my hand. I had learnt by then not to question or oppose him; it was pointless.

It took twenty minutes for someone to find the graffiti and twenty minutes and ten seconds to figure out who did it. I was called out of class an hour later. Mum and Dad were already with the principal at the wall. They both looked horrified as they examined my handiwork. It was a poorly drawn picture of the devil's sign . They asked me if I did it and I simply said yes, not even batting an eyelid. I was expelled that day and as I left the school yard for the last time I watched the cleaner scrub away at the black paint fruitlessly. He was leaning against the same wall, giving me the thumbs up. I turned my back on him and kept walking.

A year later my little brother Zach was born. By then I had been expelled from my second school after breaking the PE hall windows with some rocks. Mum thought I was looking for attention because she and Dad were always with Zach. I wished it was that easy. On Zach’s first birthday Dad left us. We just had a small party, mostly family and a bouncing castle in the back garden for our younger cousins. Everyone was inside with the cake when he told me to do it. He was tossing a lighter from one hand to the other and grinning.

Aunt Barbra was first to see the smoke. The right side of the bouncing castle was up in flames, the stench of burning bring it to her attention. She screamed at Dad to get the fire extinguisher. She saw me standing outside and ran over to me, pulling me away from the flames.

“Ciara, what on earth happened? Who did this?”

I silently held up the lighter that was clenched in my fist. Her face was horrified and I blushed with shame. I could hear Zach crying inside.

Dad put out the fire and spent the rest of the day apologizing to all our family members. Mum was just in shock and sat upstairs with Zach, trying to calm him down. When everyone left I sat on the stairs listening to Mum and Dad arguing. Most was about me. I crept silently upstairs and cried myself to sleep listening to their raised voices. The next morning Dad was gone with most of his stuff. Mum locked herself in her room and when I pressed my ear to the door I could hear her crying into the pillow.

We moved to the country when I was twelve. We moved for many reasons. Firstly we couldn’t keep our old house; mum was working part-time and running after Zach and I so we were struggling paying our bills. Secondly I think mum thought that the country would have a good influence on me and thirdly there were no more schools in our own town that would enrol me. I knew it killed mum to move away from her friends and family and I hated myself for putting this on her. I was secretly hoping he wouldn’t follow me here. But of course I was wrong.

The first person that learned of my dark secret I’d carried around all my life was my mum. She brought me home from the police station a few weeks later after getting my second warning for lighting a bonfire in the park. I knew mum was disappointed and I hated myself and him for doing this to her. As I watched her from the corner of my eye I could see how much I was hurting her. There were dark circles under her eyes and I could see wrinkles forming around her mouth. I was doing this to her. I bit my tongue and stayed quiet, fidgeting with my hands.

When we got home Zach was in bed; our neighbour Cathy was watching him. Mum sat down down and let out a sigh that echoed years of disappointment. He was smirking at me behind her. I waited for my punishment.

“Ciara, I didn’t raise you to be like this. We didn’t. We taught you right from wrong. We raised you better than this. What’s wrong?” I shrugged, keeping my eyes on the floor, holding back tears. “Do you miss your Dad? We can arrange another visit. I know he misses you too.” I stayed silent. I heard glass smash and looked up in alarm. Mum was on her feet, clenching her fists, tears running down her face. She had knocked over a glass vase in frustration.

“Then what! I can’t help if you won’t let me Ciara. What makes you do this, these bad things because I can’t take it anymore. I’m sick of running around after you and so is Zach. I just want to help you.”

My heart raced and I trembled from head to toe. “He makes me,” I blurted. A single tear ran down my cheek. It all came pouring out, all the years of pent up hate and frustration. “He made me do it all, since I was small. I never wanted to, he made me. He said he’d hurt you, you and Dad and Zach.” The tears were streaming down my face. Mum looked at me in horror, crossed the room and pulled me into her arms. From the corner of my eye I could see him shaking with rage, his teeth bared.

I told her everything about all the things he said and did and what he looked like. It felt like a huge weight had been taken off my shoulders but it didn’t last for long. The next day when Mum went to book me an appointment and Zach was playing basketball out the front, I was alone with him. The next thing I knew I was holding a spray paint can, pointing it at the living room wall.

I could see him grinning in triumph from the corner of my eye. My finger tightened on the lever. I closed my eyes and willed myself with all my heart not to do it. I thought of all the times he’d made my life trouble, all the times he’d make me hate myself. I thought of what mum had said last night; just ignore him, just close your eyes and ignore him. You’re stronger than him. He can’t hurt you.

As if in slow motion the can fell from my hand and hit the floor with a crash,rolling under the sofa. I held my breath and shaking slightly turned to face him. He was livid. His face was contorted in rage I had never seen before and his eyes were like two burning balls of all consuming fire. He came face to face with me and I felt the room go cold.

“Don’t you dare disobey me,” he said. He was grinding his teeth together and it sounded like metal on metal. I flinched. “I’ll kill him, you know I will so DO WHAT I SAY!”He shouted the last few words and grabbed hold of my left wrist. His fingernails were drawing blood and I tried vainly to squirm away.

“No,” I stammered, trying to make myself seem braver than I really was. I jerked away. “No no, no, no, no, no, no!” I chanted, closing my eyes and putting my fingers in my ears.

I ran out the front door and saw the giant SUV in the middle of the road. It had a smashed windscreen and had collided with a lamppost. That’s when I saw Zach. He was lying face down on the pavement, his basketball rolling away from his hand which was sticking out awkwardly from under him. I knew he was dead. The driver was getting out of his car but I wasn’t even paying attention to him. There was a sign etched into the side of the red SUV, a sign I knew too well, a black star surrounded by a circle; the sign of the devil. I slid to the ground and put my head in my hands, his laughter ringing in my ears.